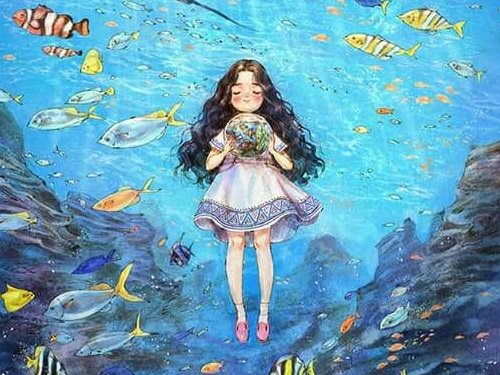 Mira has long, dark curly hair that reaches down her back. Most of it is parted down the middle with the occasional unruly cowlick curl that doesn't want to stay put. On nice days she wears a simple white cotton dress and slippers, or goes barefoot. She has the appearance of a child of five, with large purplish-blue eyes and only three and a half feet tall. She always carries a large blue crystal orb with her wherever she goes, about the size of a personal watermelon. Very rarely is Mira seen without it, as it is her most precious treasure. She always speaks in a foreign language that very few people understand, but understands Adelunian Common.

Although the orb she carries is centuries old, Mira is still a child in mind and spirit. Like all children, she is curious and cheerful with a mischievous streak. She has quite a temper when she gets upset, and will retaliate with a Magnífico Cabezazo to the offender's abdominal region to express her anger. Mira doesn't hold grudges, so after she headbutts someone she calms down. The only thing that upsets her to where she sustains her anger is attempting to steal or damage her orb.

Mira's orb was once a treasured relic that could move the tides and conjure up lightning storms. Originally created as a gift to symbolize a ruler's divine authority in a long-forgotten kingdom, it was lost and exchanged hands until it became part of Cordath the Firestarter's hoard. When spectral energies and phantasmal creatures escaped the weakened barriers of Kujishoku, those very energies caused many new tsukumogami to be born. After awakening for the first time in the darkness of the dragon's cave, Mira wandered her way out of the dwarven miners' tunnels into the great, wide world waiting outside for her to discover. During the great invasion from the new land now known as Onnen, she found herself trapped in the remains of the once-great kingdom of Endapano. Saved by Conclave forces, she met the Goddess Angela and was in her care. When the war was over, Mira stayed on the island where she met another kind of mother, one that would show her the darker side of humanity. Where Angela taught her a mother's unconditional love, Mariah would teach her the subtle difference between kindness and calculated intentions.

Since she is basically a possessed crystal ball, Mira is incredibly durable for someone her size and age. Her human form is more of a magical projection than an actual body. Whatever material her orb is made of has the hardness and resilience of a very large diamond, which means a lot of nasty bruises for anyone on the receiving end of her Magnífico Cabezazo. Using her orb she can channel and cast powerful lightning, water, and light magic–aside from throwing it at offending enemies with the speed of a super-charged firecracker.

Her signature move is the Magnífico Cabezazo, a high-powered headbutt that can knock someone clear off their feet and is often followed up by another 'headbutt' from her orb. With her high affinity for magic she can levitate for extended periods of time and self-repair herself. As an inanimate object brought to life through magic, she cannot bleed and doesn't need to eat to sustain energy. Physical and magical attacks can still damage her however.

A shield wielded by the original sea goddess. It is a mirror made of abalone shell, mother of pearl, and ancient ice. This shield has the innate ability to grow at will. The larger it gets the less durability it has before the ice will crumble. It will reform with a small time frame first as water then as a solid. Water will also call to it forming barriers where the shield cannot reach as long as the shield is intact.
This is an event prize for the 2019 Anniversary Event: A Tale of Mortals and World's End.
1
Seed Pouch With Sling

These specialized seeds have been handed out with a slingshot. People have been instructed to try and hit as many Eldritch beings as possible. The seed pouch seems to be never ending… I wonder what will happen with them.
This is an event prize for the 2019 Anniversary Event: Interitus: A Tale of Mortals and World's End
1
Storm Rod

An iron wand with a large crystal at the end of it, it has a swirling lightning storm brewing within it. It's aura is more powerful than that of it's Irian cousin though it does not detect void storms.
Enhances lightning magic.
1
Breath of Ki

This spell allows the caster to breathe underwater, or to give another person that ability.
1
Belt

A skirt made out of simple fabric. It doesn't look very expensive but it's better than nothing.
1
Gloves

Meant to be worn on the hands, these gloves are sturdy and warm.
1
Slippers

These light shoes are delicate, easy to put on.
1
Common Dress

A simple dress, made of ordinary material, and suitable for general, everyday wear.
1
Maurelle's Sphere

Crafted in the depths of Feeorin Forest, these orbs are reminders. They can be used as calendars, journals or any other store of information, but, like the mischievous nature of their creators, they have a darker side. If ignored when trying to remind their owner of something, they will promptly begin yelling at that person to "Listen." If ignored further, the orb grows wings and begins ramming into the person's head until they pay attention. These spheres have been known to bludgeon careless owners.
Hey... Hey listen...
1
Canelux's Winged Armor

Designed from the stories of the elder sister moon which told of her once beautiful wings and how they were torn asunder, this armor allows the user to fly. The armor also offers minor resistances to elemental magic. The wings of this armor are not white but cosmic much like the stories. The cosmos of these wings move just like the sky above.
1
Neolani’s Hairpin

Neolani was a beautiful mermaid from Feeorin Forest who specialized in underwater magicks. She crafted this hairpin out of pearls and other objects that have made it into the lake city. It’s enchantment amplifies hydromancy of all kinds.
Enhances water magic.
1
Astral Projection

This spell allows the caster to project themself on to another plane.
1
Arcane Empower

This spell supernaturally enhances the target's magickal ability much like the similar spells Strength and Lesser Agility.
1
Minor Levitation

A spell that allows for the caster’s body to be raised off the ground for a brief amount of time.
1
Summon Item

The caster summons an item, normally armor or weapons, that they own from the aether.
1
Minor Telekinesis

This spell allows the caster to move small objects with their mind.
1
Lesser Agility

This spell grants the ability to move at heightened speeds.
1
Holy Light

This spell summons a blinding light imbued with holy power. Though damaging to all, it is particularly effective against those with an evil nature, or the undead.
1
Galvanic Weaving

This spell allows the caster to manipulate small amounts of electricity and lightning with their mind.
1
Water Weaving

This spell allows the caster to manipulate small amounts of water with their mind.
1
Light Weaving

This spell allows the caster to manipulate small amounts of light with their mind.
1
Strength

Increases the physical strength of the user for a short time.
1
Water Meld

The caster melds with water, keeping them hidden, or protected from water-based attacks.
1
Air Meld

The caster melds with the air around them keeping them hidden, or protected, from air-based attacks.
1
Greater Heal

An advanced healing spell capable of sealing all but the most grievous of wounds.
1
Chain Lightning

Several bolts of lightning shoot down from the sky to strike one or more targets.
1
Tsunami

The caster creates a massive wave of water for a short period of time.
1
Lucky Moon Biscuits

Made from flaky pastry and sweetened filling, these delicious seasonal delicacies come in various flavors. Eating one of these fills you with energy, restoring your stamina. Like the phases of the moons, they come in boxes of nine biscuits.
Special event prize for Naota and Shiloh's 2018 event Night of a Thousand Phantasms.
1
Jack O' Lantern

A literal lantern made out of a pumpkin. It comes in a variety of shapes and carved faces. An eerie wisp like glow comes from inside of it lighting the way for you.
This Jack O' Lantern is enchanted to enhance spectral or ghostly magic.
1
Seraphim Feather

Seraphim are legendary creatures rarely seen by mortals, and yet their existence is provable. In the highest regions of Revaliir, scattered infrequently throughout the mountains, Seraphim feathers can be found. These feathers glint with an impossibly golden sheen, and can even be used as lanterns in darkness. They provide a minor, elemental enchantment of Light.
1
Thunderwave

Everyone in a 10 foot radius around the caster gets pushed back and takes minor lightning damage. If one’s strength is great enough they can withstand the push back. Caster cannot help who this hits.
1
Drae's Bottled Starlight

Made by the Keeper to help his children combat their fear of the dark, this vials of thick colored glass can cast a starscape on the walls and ceiling of a room. When placed on the ground of an area or on a shelf, it creates a circle of protection with a 20 ft Diameter.
Event Prize for Adraejen’s 2017 Event: Days of Hebheka
2
Lucina's Moonlight Lantern

This lantern was made by the fallen goddess Lucina. She was once considered a saint among the people of Parvpora before the Tree was tainted. She would light the way home for sailors using the moon. She created these lanterns to ward off the evil of her conclave siblings. When the tree became tainted these delicate stained glass lanterns were hidden so she could not destroy them.
Can see through darkness made by magic by ten feet.
Event Prize for The Abedian Festival of Color 2016.
1
Vada Carol

This oratory spell allows the user to create displays of miniature, aurora borealis, but was not originally developed by the Vada people despite its namesake. The magic behind it comes from Zet’ski, where the half-angels used it to bring in the New Year. It was only after the spell started being used to defend against Void creatures in the Valley of Vada that its origin was forgotten.
1