All About Masashi Kaname 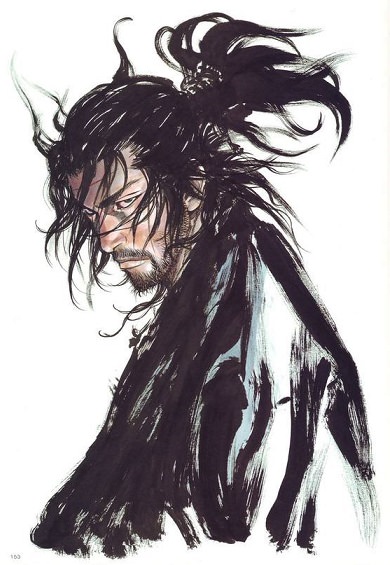 Theme: The Way of Honour

Having lived with a rough crowd since he was a child, his appearance is somewhat coarse. His complexion is swarthy, face with unshaven stubble, and his black hair always slightly unkempt no matter how much he tries straightening it out. So far he has managed to keep it restrained in a ponytail with it still going wild at the ends. His expression normally is intense, being the cause of several poor first impressions. Beneath the intimidating stare is man who keeps his word and upholds a code of honor, choosing to act on a higher standard. Every task he puts his hand to is done wholeheartedly, as to give anything less than his all would be a disrespect. A honest soul with a very rugged exterior, Masashi's heart is wider than most from similar circumstances. He is a faithful and loyal friend to those who are close to him, and a resolute man unafraid to fight for his beliefs when facing his enemies.

Masashi was a street orphan as far as he can remember. He and several other children used to steal food and hide from the guards just to survive. Being strays meant they weren't welcome in most places, and life was hard. That all changed when a man named Gen Takara took them in. He gave them names, a place to call home, and the closest thing they had to family. On the outskirts of Nisshoki near the mountains, Takara established a small group of brigands that claimed the surrounding area as their turf. They were just a small regional band, defending villages in their territory from others like them in exchange for protection fees. Years passed and Masashi learned how to act as a member of the hierarchy, respecting his superiors and mentoring new recruits. They were doing well and the villages under their protection respected them. Unfortunately that peace was short-lived.

As he began entering the later years of his life, Takara once called him aside and asked him what he would do if he disbanded their gang. At the time Masashi didn't understand what the older man was implying. He answered he would still follow Takara no matter what, out of gratitude for being the father he and the others never had. That was one of the last moments he shared with Takara before his entire world was turned on its head. Takara's second in command, Shohei Hiryu, killed Takara in a violent coup for control of the gang. Several members loyal to Takara were killed trying to defend their leader and a few of the survivors ran. Masashi was ready to stand and fight for Gen's life when the man told him with his dying breath to go and live. He managed to escape unharmed, but only after making the painful decision to leave behind the man whom he called 'father'.

After self-appointing himself as leader, Shohei moved the gang to Jayou where he gradually rose to power in Jayou's underworld. Ever since Shohei's usurpation of power, Masashi became a wanted man. Still seeking to wipe out the last remnants of Takara's most devoted loyalists, the head of the newly renamed 'Hiryu Clan' now controls the members who remained with an iron fist. It will only be a matter of time before Masashi will be forced to face Hiryu in a confrontation where only one survives.


The Path of Brotherhood:

Always lands on whatever side you think of.
1
Hibiscus

A garden favorite of tropical islanders and botanists.
1
Petrified Bark

Ancient remains of Verya. Just a tiny bit of how massive the World Tree was before her fall.
1
Methi

A sharp smelling herb used in exotic dishes. The seeds are mixed with other spices in Abedi’s famous curry.
3
Bolt of Silk

A simple piece of silk. Maybe it can be used for something?
3
Soapstone

A hardy pack, with two straps that allow it to be worn on one's back. It's ideal for carrying supplies while on the move.
1
Ataiyan Katana

A long, curved blade, these swords are treasured for their strength. The forging process is long, as the metal is folded, pounded flat, and folded again, many times over until a strong, yet flexible blade is formed.
Enchanted with a keen rune so it never rusts or dulls from age. Enchanted with a second rune so that the blade has an easier time cutting through small amounts of other metals. The weapon stores power in its scabbard that increases the strength and sharpness of drawing strikes. The scabbard can also be used as a small shield in a pinch.
1
Leather Vambraces

Basic footwear consisting of a sole, and straps binding them to the wearer's feet.
1
Kimono

Straight from Ataiyo, kimonos are beautiful garment crafted with love and care. They come in a variety of colors and fabrics. All of the women's come with an obi as well.
1
Acclimatize

This spell allows the user to adapt their body to the temperature of their surroundings. It provides no outward change in physical characteristics or other racial traits.
1
Mind Tower

This spell allows the caster to better resist and defend against mental attacks and intrusions, such as charm spells, telepathy, or similar psionic magicks.
1
Lesser Agility

This spell grants the ability to move at heightened speeds.
1
Greater Heal

An advanced healing spell capable of sealing all but the most grievous of wounds.
1
Cure

This spell is used to rid the target of a single curse, nonmagical disease, or status infliction.
1
Canteen

This parchment shows a region of Revaliir, or the entire world. It is useful for navigating.
1
Compass

A navigational instrument with a needle that points north and south. Essential when traveling through lesser-known parts of the world.
1
Grooming Kit

A small box full of everything a man or woman may need for their grooming needs: scissors, razor, creams, a brush, and so on.
1
Houseware Tools

The caster melds with the air around them keeping them hidden, or protected, from air-based attacks.
1
Fire Meld

The caster melds with fire, keeping them hidden, or protected from heat and fire attacks.
1
Earth Meld

The caster melds with the earth and flora, keeping them hidden, or protected from earth attacks.
1
Water Meld

The caster melds with water, keeping them hidden, or protected from water-based attacks.
1
Renaissance

When worn, this Aventurine pendant will strengthen the will and focus of its wearer tenfold. Due to its effects, it’s suggested to only wear it in times of great need for no more than one hour at a time. While strength of will and focus are enhanced, the physical limits of the body are unchanged.
This is an Event Prize for Naota's 2017 Event Renaissance of Lumos.
1
Goddess Cube

A beautifully decorated stained glass puzzle box made in platinum, this acts as a portable storage device akin to Reynash’s Endless Bag. The sides of the box bear symbols and related imagery of the goddesses of Life and Luck.
This item is an event prize for Shiloh and Angela’s 2018 Deity Event: Lunacy of the Deep
1
Wayfinder's Widget

This curious, tablet-shaped device projects a map of where you have been on its surface, but only for one floor. An excellent tool for the intrepid explorer and daring dungeon delver, as its illuminated surface and sleek design make it markedly superior to any magic map.
This item is an event prize for Shiloh and Angela’s 2018 Deity Event: Lunacy of the Deep
1
Bottled Shiranui

A willowisp captured in a bottle. When released it emits a phosphorescent glow and can multiply quickly. Unlike most light sources it does not consume fuel or release heat. Max of 10 wisps at a time per thread.
This is an event prize for Naota and Shiloh's 2018 event Night of a Thousand Phantasms.
1
Beetle Horn Tonfas

Crafted from hard beetle horns, these tonfas are well balanced and ready to fight.
This is an event prize for Staff's 2018 Anniversary event Negation Order: Exterminate the Moons.
1
Boots

A simple garment which might resemble a long shirt that stops somewhere between the wearer's hips and ankles. The sleeves may be long or short, depending on the local climate.
1
Dagger

A short, bladed weapon with a sharp point. Can be used to slash or pierce an enemy.
1
Gloves

Meant to be worn on the hands, these gloves are sturdy and warm.
1
Hunter's Instinct

Increases the physical strength of the user for a short time.
1
Whetstone

A beautifully smithed blade made from sapphires that has a chilling aura to it. It is most likely carved by the dwarves of Baltil. The blade itself glows like a thousand stars.
2015 Christmas Advent Calendar: Day 7
1
Lucina's Moonlight Lantern

This lantern was made by the fallen goddess Lucina. She was once considered a saint among the people of Parvpora before the Tree was tainted. She would light the way home for sailors using the moon. She created these lanterns to ward off the evil of her conclave siblings. When the tree became tainted these delicate stained glass lanterns were hidden so she could not destroy them.
Can see through darkness made by magic by ten feet.
Event Prize for The Abedian Festival of Color 2016.
1
Arc of Want

A pendulum that points its owner to what their heart truly wants.
This is an event prize for Angela and Dalanesca's 2018 event A Mortal's Heart.
1
Sun's Kiss

A lightweight silver shield accented in black tourmaline. Will absorb any magickal attack when used, and reflect out a short burst of near blinding light magick to give the shielder time to prepare their own returning attack (or flee!).
This is an Event Prize for Naota's 2017 Event Renaissance of Lumos.
1
Drae's Bottled Starlight

Made by the Keeper to help his children combat their fear of the dark, this vials of thick colored glass can cast a starscape on the walls and ceiling of a room. When placed on the ground of an area or on a shelf, it creates a circle of protection with a 20 ft Diameter.
Event Prize for Adraejen’s 2017 Event: Days of Hebheka
1