Rashomaru towers over most his age, standing at a staggering six feet and four inches. His long black hair is kept neatly tied to keep out of his way and his eyes are a golden amber. His usual attire includes his kimono and a set of lacquered armor that is only worn when traveling away from home. When working with his parents a light kimono and sandals are what he wears. His sudden growth in adolescence has made him reserved and more quiet than his former cheerful self. Like his father he is straightforward and honest, though much more gentler thanks to his mother.

His kindness and physical strength makes him the one who handles most of the heavier tasks and he hardly complains. Perhaps it is due to his good nature that he is more likely to yield in the face of confrontation. As he is still young, he shows respect and a little too much politeness towards his elders. His speech comes off as being very formal out of this habit.

Born as the first child of his parents, Rashomaru had a fairly normal childhood. He was an obedient and cheerful child and due to his kind personality it was easy for him to make friends. When he was six, the family welcomed an orphan who had just lost his family as their own. Rashomaru did his very best to be a good older brother and the two boys became as close as true blood siblings. When he was ten, his parents allowed him to take sword lessons at the local monastery where he met a boy with hair white as snow. However, things changed in his twelfth year. As a result of his mother's blood, his eyes turned a golden yellow and he began to grow rapidly taller with each passing year. Unable to hide his eyes, most of his childhood friends began to keep their distance. Eventually his friend at the monastery went back home, leaving Rashomaru with only two others who didn't shun him: his younger brother and a girl named Nui.

When he reached his sixteenth year, his family traveled to Kujishoku where he underwent a coming-of-age ceremony at the ancestral grounds of his mother's clan. At the end of the rite, he was gifted a great sword especially designed for him. When he laid eyes on the unsheathed blade, he named it 'Arahabaki'–after a legendary saint revered by his mother's people. Afterwards they returned home where he continued to assist his parents with running the family restaurant.

He carries around a six and a half foot odachi named Arahabaki as his primary weapon. Much larger than the standard katana, odachi are typically considered ceremonial weapons. However due to his strength he can wield it single-handed with ease. This blade was granted in a coming of age ceremony where Rashomaru gave the sword its name.

Rashomaru's most obvious abilities are his great physical strength and endurance due to his oni heritage. Heavy weapons that are typically used two-handed can be used with only one when put in his hands. His primary weapon focus lies in longswords and greatswords as regular blades are extremely light for him. His strength gives him an advantage in handling weapons with a long reach such as polearms, though he as not as proficient with them than he is with his odachi. 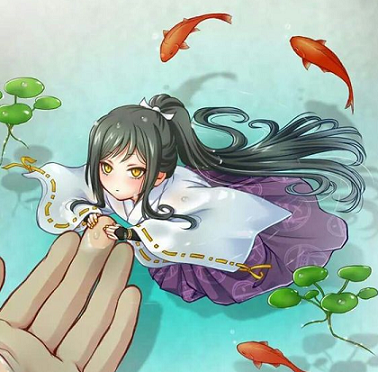 Carved from the bones of fallen wyvern, the Hiadref have enchanted these rings to aid outsiders in surviving the harsh cold of their home island.
1
Lantern of Dark Hearts

A lantern crafted from the darkest wood, almost black in color. When the holder lights the fire within the lantern, the flame will shine a light in the direction of what their heart desires most.
Rhea's 2016 Event: Stories of Love
1
Ring of Sanctuary

This ring allows the wearer to hide in a pocket of dimensional space until danger has passed.
Prize for the 2017 Triune Event: Hell Hath No Fury
1
Aloe Vera

This spiny succulent is used in medicine for its soothing properties. The flesh of its leaves has a gel like consistency and is a common ingredient for sweetened summer drinks.
1
Lucky Coin

Always lands on whatever side you think of.
2
Blue Amber

Fossilized resin from an enchanted tree. Residual magic has given it a bluish hue.
1
Petrified Bark

Ancient remains of Verya. Just a tiny bit of how massive the World Tree was before her fall.
1
Bolt of Silk

A simple piece of silk. Maybe it can be used for something?
8
Spinel

A semi-precious gemstone used to craft other things. It comes in a wide spectrum of colors and is often mistaken for corundum.
5
Clay

A lump of potter’s clay. Often used for crafts.
2
Seed Pouch With Sling

These specialized seeds have been handed out with a slingshot. People have been instructed to try and hit as many Eldritch beings as possible. The seed pouch seems to be never ending… I wonder what will happen with them.
This is an event prize for the 2019 Anniversary Event: Interitus: A Tale of Mortals and World's End
1
Mint

A common herb found in gardens, the fragrant essential oils extracted from the leaves are used in aromatherapy and flavoring hard candies.
4
Hibiscus

A garden favorite of tropical islanders and botanists.
4
Jade

A precious gem made from two different minerals. It comes in a variety of attractive colors but is most known for it's deep green. This precious gem is sought after by merchants, enchanters and warriors alike for its allure in most markets.
7
Soapstone

Ethereal essence extracted from banshees and higher wraiths, it possesses spectral energies more powerful than standard ectoplasm. Obtaining this essence is no easy task, as extraction puts the seeker in close quarters with malevolent spirits bent on tormenting the living and cannot be collected once the subject leaves the material plane.
4
Boots

A simple garment which might resemble a long shirt that stops somewhere between the wearer's hips and ankles. The sleeves may be long or short, depending on the local climate.
1
Journal

The pages in this bound book are blank, allowing the owner to use it to keep a record of their thoughts and activities.
1
Pouch

A little belt pouch for one to put their coins or jewelry into.
1
Quill and Ink

A writing implement made from a long feather, used by dipping the tip into a pot of dyed liquid.
1
Whetstone

A hardy pack, with two straps that allow it to be worn on one's back. It's ideal for carrying supplies while on the move.
1
Grooming Kit

A small box full of everything a man or woman may need for their grooming needs: scissors, razor, creams, a brush, and so on.
1
Houseware Tools

Used to start a fire. A must have for every adventurer!
1
Kimono

Straight from Ataiyo, kimonos are beautiful garment crafted with love and care. They come in a variety of colors and fabrics. All of the women's come with an obi as well.
1
Sandals

Basic footwear consisting of a sole, and straps binding them to the wearer's feet.
1
Parasol

A finely crafted object that a lady would usually carry to keep the sun off of her.
1
Ataiyan Katana

A long, curved blade, these swords are treasured for their strength. The forging process is long, as the metal is folded, pounded flat, and folded again, many times over until a strong, yet flexible blade is formed.
Enchanted with a keen rune so it never rusts or dulls from age. Enchanted with a second rune so that the blade has an easier time cutting through small amounts of other metals. The weapon stores power in its scabbard that increases the strength and sharpness of drawing strikes. The scabbard can also be used as a small shield in a pinch.
1
Hunter's Instinct

Increases the physical strength of the user for a short time.
1
Lesser Agility

This spell grants the ability to move at heightened speeds.
1
Parvpora's Sight

This spell allows the caster the ability to see better in the dark.
1
Acclimatize

This spell allows the user to adapt their body to the temperature of their surroundings. It provides no outward change in physical characteristics or other racial traits.
1
Greater Heal

An advanced healing spell capable of sealing all but the most grievous of wounds.
1
Protection

Pauldrons crafted from the scales of dragons, they offer the best protection for the shoulders.
1
Dragonscale Leggings

Crafted from the smaller scales of the dragon, these leggings offer a high level of protection, without being as encumbered as when wearing plate armor.
1
Dragonscale Chest

Crafted from dragon scales, this protects one's torso. The same piece will fit a man or woman.
1
Dragonscale Gauntlets

Gauntlets crafted from dragon scales, they are not the most flexible, but offer a high degree of protection.
1
Tsukiko's Obi

Crafted from dark blue silk woven in Ataiyo, this wide belt looks innocuous upon initial inspection. The obi, however, is actually woven through with shadowthread, giving its wearer greater strength and endurance at night. This increase is accompanied by bloodlust, though, brought about by a drop of werewolf blood placed within the fabric. In keeping with werewolf lore, the obi's effects increase during a full lunar cycle up to double effectiveness when both moons are at their fullest.
Refer to the wiki page about the Seasons for both moons.
1
Minor Telekinesis

This spell allows the caster to move small objects with their mind.
1
Summon Item

The caster summons an item, normally armor or weapons, that they own from the aether.
1
Skyfire Blade

This allows the caster to temporarily enchant their weapon to create an explosion when the weapon makes contact. The explosion is very mild in damage and not nearly as powerful as the Explosion spell itself.
1
Mind Tower

This spell allows the caster to better resist and defend against mental attacks and intrusions, such as charm spells, telepathy, or similar psionic magicks.
1
Lucina's Moonlight Lantern

This lantern was made by the fallen goddess Lucina. She was once considered a saint among the people of Parvpora before the Tree was tainted. She would light the way home for sailors using the moon. She created these lanterns to ward off the evil of her conclave siblings. When the tree became tainted these delicate stained glass lanterns were hidden so she could not destroy them.
Can see through darkness made by magic by ten feet.
Event Prize for The Abedian Festival of Color 2016.
1
Drae's Bottled Starlight

Made by the Keeper to help his children combat their fear of the dark, this vials of thick colored glass can cast a starscape on the walls and ceiling of a room. When placed on the ground of an area or on a shelf, it creates a circle of protection with a 20 ft Diameter.
Event Prize for Adraejen’s 2017 Event: Days of Hebheka
1
Arc of Want

A pendulum that points its owner to what their heart truly wants.
This is an event prize for Angela and Dalanesca's 2018 event A Mortal's Heart.
1
Crystallized Hellfire

Usually found in the depths Revaliir’s hottest volcanos, these shards occur rarely and are as hard as diamonds. Apoy is a popular spot to find them, but those who go looking are frequently never seen again. It is not uncommon to find a lost journal next to lava rivers from foolish adventurers who were unprepared. The hellfire provides a minor, elemental enchantment of Fire.
1