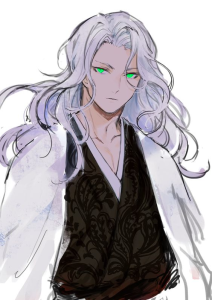 While he was human, Niran was born as the first son of the 10th consort to an aging monarch. His mother Dahud was a powerful sorceress, and his father had selected her when he was bewitched by her keen mind and peerless beauty. From the moment he was old enough to comprehend, Niran knew that he had no chance to sit on the throne if things stayed as they were. With so many other princes ahead of him in the line of succession, he would never expect to see his turn within his own lifetime… unless a few of his half-siblings 'bowed out' first.

From the age of four his mother wasted no time in educating him in music, arithmetic, etiquette, and literature–as well as what she knew best: sorcery and poison. Lady Dahud instilled into her son the belief that power was something that one took for themselves. Regardless of one's birthright or position, if you had the ambition–you could achieve anything. After all, was she not a living example? She had come from a family of lesser nobles, yet her seat was now above them. For years his dear mother had whispered into his ear of how he had been born with the right to rule, of how he was a far better candidate for the throne than his foolish siblings. And it was true; after all he had been born under the right stars. He could discern the hidden meanings within the words of courtiers, and he understood the unspoken rules of court intrigue better than anyone.

While his younger siblings were struggling to take their first steps, Niran was already climbing the ranks and making a name for himself using his exceptional talent. For the next few years he and his mother played the long game–walking the fine line between laying low while maintaining a certain degree of the king's favor. There were others within the palace who were aware of their movements, other consorts and their supporters who all sought the same goal as they. Those who acted against them suffered retribution tenfold, and those who went on the defensive were put in their place. He and his mother knew that ambition must be tempered with patience, and at times they simply sat back as the other consorts and princes tore each other down.

With his father's passing, all of those years of scheming and political maneuvering had finally borne fruit. Although King Samash had declared the second prince as his successor, there were many others who disagreed. And when Prince Asad killed Amram to take the throne through a violent coup, Niran knew he only needed a few steps more before that seat would finally be his. When Asad was reveling in his victory, it was all too easy for him to create an accident–one involving the venomous bite of an adder. With the military faction's figurehead gone, all that was left was to clean up the dissenters. But before he had the chance to do so, disaster struck. Without warning, an earthquake hit the island–causing the entire kingdom and the land it was built upon to collapse into the sea.

His last thoughts were of his lifelong ambition being snatched away by a cruel turn of fate. However, that was not the end of him. While most would abandon their hopes and dreams in the face of death, Niran's heart was fully consumed by his unrelenting desires. He became a sea spirit, cruel and merciless like the cold waters that claimed him.

Fossilized resin from an enchanted tree. Residual magic has given it a bluish hue.
1
Chromite

This alloy is a common find in smithies and tinkerers’ workshops. Objects crafted from chromite are resistant to corrosion.
1
Gold Ore

A piece of gold ore. Not very useful now, but maybe it can be combined with other things?
1
Mind Tower

This spell allows the caster to better resist and defend against mental attacks and intrusions, such as charm spells, telepathy, or similar psionic magicks.
1
Mind Rot

This spell confuses and dulls the mind, causing the target to be unaware of their surroundings.
1
Poison

This spell poisons a single target, draining their strength and stamina until the target is cured or the spell's effects wear off.
1
Shadow Puppet

This spell summons fiends from the shadow plane for a brief time.
1
Lesser Agility

This spell grants the ability to move at heightened speeds.
1
Invoke Familiar

A familiar is summoned from another plane, which serves the caster for a short period of time.
1
Invoke Fire Elemental

A random fire elemental is summoned from another plane, which serves the caster for a short period of time.
1
Sins of the Father: Pride

A spell which induces intense pride in its target, making them more prone to take - and give - offense when interacting with others. Can also be used to make a target more susceptible to appeasing, convincing them to do something by appealing to their pride.
Duration: 5 hours
The father was proud, and looked down only to condescend. He never saw the pitfalls that were his flaws.
1
Invoke Water Elemental

A random water elemental is summoned from another plane, which serves the caster for a short period of time.
1
Invoke Spirit

A spirit is summoned from beyond the grave, which serves the caster for a short period of time.
1
Invoke Air Elemental

A random air elemental is summoned from another plane, which serves the caster for a short period of time.
1
Water Meld

The caster melds with water, keeping them hidden, or protected from water-based attacks.
1
Minor Telekinesis

This spell allows the caster to move small objects with their mind.
1
Memory Flux

Allows the castor to recreate, create, or change a memory of the target. Target gets a higher chance to resist if they are unwilling. The memory twist lasts until either something triggers the memory to awaken or the imaginary memory disappears. This depends on caster/target agreement.
1
Phantasmal Daydream

Target imagines some enemy, object, or phenomenon for only a few minutes. This spell can be resisted by those who are strong enough. Caster must target someone within their line of sight.
1
Charm

This spell allows the caster to seem more endearing to the target, and the target is more receptive to the caster's suggestions or ideas.
1
Summon Item

The caster summons an item, normally armor or weapons, that they own from the aether.
1
Teleport

This spell allows the caster to instantly move to another location, so long as they can see their intended destination.
1
Parvpora's Sight

This spell allows the caster the ability to see better in the dark.
1
Incognito

This spell allows the caster to change their physical appearance.
1
Hunter's Instinct

This spell allows the caster to breathe underwater, or to give another person that ability.
1
Arcane Empower

This spell supernaturally enhances the target's magickal ability much like the similar spells Strength and Lesser Agility.
1
Quill and Ink

A writing implement made from a long feather, used by dipping the tip into a pot of dyed liquid.
1
Blank Scrolls

Made of paper or parchment, these scrolls are ideal for writing on.
1
Canteen

Mirror, mirror on the wall, who's the fairest of them all? Can be large or compact. Intended for people all over to view their pretty faces.
1
Herbs

These herbs can be prepared in a variety of ways— ground into a balm, brewed into a tea, chewed whole, and more— and have a variety of properties that make them valuable to alchemists, healers, assassins, and more.
1
Grooming Kit

A small box full of everything a man or woman may need for their grooming needs: scissors, razor, creams, a brush, and so on.
1
Game Box

A box with a checkered top that holds the pieces necessary for many games of both noble and common origins. Cards, chess pieces, and dice are the most common items found inside, but other cultures have been known to stuff in more exotic things things like shogi pieces.
1
Sandals

Basic footwear consisting of a sole, and straps binding them to the wearer's feet.
1
Noble Necklace

A fancy necklace made out of precious metal and gems.
1
Temperature Beach Wear

Originally invented by rogue Hiafae tailors, these outfits will change the temperature of the closest water to whatever the wearer desires. You can go diving around Itjivut without feeling cold in these!
1
Ocean Armor

Forged by the merfolk using underwater volcanic vents, this set of lightweight, scale mail allows for breathing underwater and withstanding the great pressure of the ocean depths.
1
Wyvernbone Ring

Carved from the bones of fallen wyvern, the Hiadref have enchanted these rings to aid outsiders in surviving the harsh cold of their home island.
1
Anima Ring

This ring allows the user to seal a soul within the sunstone gem. The user can then use the soul to power their magic or their physical strength until the soul becomes destroyed.
Prize for the 2017 Triune Event: Hell Hath No Fury
1
Miasma

A spell that when cast causes the target to act upon his or her darkest desires or wishes; or conversely can cause the target to see their greatest fear.
Award for Dalanesca's 2016 event: Restore the Balance!
1
Mirage Shell

This iridescent shell from the mirage snail conjures up phantasmagorical illusions through enchanted mist. A favored tool among tricksters and those looking for a quick getaway.
This is an event prize for Shiloh Kyrie's 2020 God Event: Mirage of Kavala.
1
Slippers

These light shoes are delicate, easy to put on.
1
Signet Ring

An engraved ring that bears the emblem of royalty, nobility, or one's family. Typically used as a seal for letters, official documents, or as heirlooms.
1
Noble Trousers

A pair of pantaloons with superior quality. Only the finest nobles and heroes can afford to wear these.
1
Noble Shirt

This garment, worn on the upper body, made from the finest fabrics. Comes in many types for both men and women.
1
Noble Robes

These loose-fitting garments are well made, from the finest material.
1
Noble Cloak

This noble cloak is crafted from the finest threads to bring class and dignity. It, also, has a hood to protect the wearer's hair.
1
Gloves

Meant to be worn on the hands, these gloves are sturdy and warm.
1
Belt

A simple piece of material, usually leather, that holds up one's trousers.
1