All About Callamyre na Trough 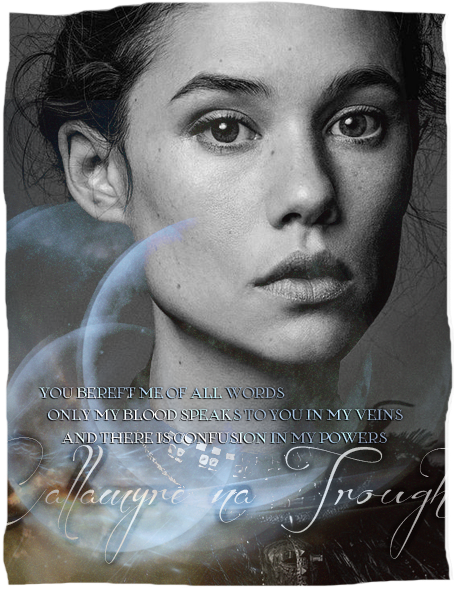 Age: 19 upon siring (was turned in the equivalent of Aug 2006). She has not seen her Sire since, and was forced to adjust to her vampirism without guidance; she resents the condition but appears to have accepted it.

Eyes: The kind of hazel that is more brown than green; they shift to a bioluminescent gold when affected by intense emotion and/or vampiric hunger. Rimmed with red if she has gone without Feeding for some time.

Hair: Often secured in some haphazard mess of dark chocolate curls upon her crown, the loose ringlets reach the middle of her back on the rare occasion she leaves them down.

Skin: Pale, covered from head to toe with freckles. Paler if hungry.

Build: Slight of frame. Thin, clumsy arms to knock stuff over with, long legs she often trips over.

Distinguishing Marks: No obvious blemishes mar her skin, although she does have a circular burn scar on her lower sternum.

Homeland: The island nation of Caerdryyn.

Relations: Missing a part of herself; recovering albeit slowly.

Occupation: Part monster [strike]hunter[/strike] finder, part mad scientist, wholly curious to a fault. Does the occasional doctoring on the side.

Minor spatiomancy (currently "magic-blocked"; active and inactive); what she thought as a child was a form of telekinesis, Calla has since come to understand that it is much more than that. She has learned that she can affect her surroundings in peculiar ways, including, but not limited to: being able to draw wind into the sails of a frigate, the ability to create a wall of snow , healing/regrowing someone's hand (the sacred blacksmith), performing "open heart surgery" without the use of any medical utensils, and many more throughout the years. Her magick does not seem to be drawn from any manipulation of elements, but rather what she believes to be "matter". She cannot create anything from nothing, she can only manipulate what she has access to in some way. Most of what the scientist has done has been experimental and perhaps a bit reckless in that regard, and she is always trying to push herself to learn more about her limitations. In addition to what she has achieved on purpose, it is common that her emotions affect her ability to cast any spatial magick, and there have been times when she has found herself to be "completely blocked". It is heavily tied to her other major ability, empathy.

empathy ("magic-blocked"; inactive); the doctor has always had a knack for reading people. At least, in a way. The girl cannot always decipher what it is she is feeling, but there are also instances in which she is overwhelmed by every little emotion and micro-expression as if they're exposed wiring that is shocking her again and again as the cable flails about. This is not an ability she has any power over. It comes and goes as it pleases with a mind of its own, so to speak.

Since becoming a vampire, this, along with her spatial magick, have slowly increased in power over time, but she still does not consider herself a particularly powerful mage.

Magic-blocked: Due to her recent loss, the doctor's magic seems to have left her for the time being.

Personality: Stubborn. Reclusive. Secretive. Can be bubbly at times, and excitable when her curiosity has been piqued. She is very slow to trust others, but she is loyal to those who have it. Has been known to disappear from the lands of Hollow for months on end to seek out work, and answers. When she sets her mind to a task, it is difficult for her to see anything else, and she becomes very driven to find the solution to whatever puzzle has ensnared her attention. Struggles with intense bouts of paranoia; thinks certain people are "out to get her". She refers to these people as the "Monster Mob", members of a secret organization set out to destroy non-humans. Although she was certain they had been expunged, the mysterious neurotoxin which recently took the life of her human father has her second-guessing whether the murderous cabal is still around.

Attire: Callamyre prefers modest clothing. She is often seen wearing black work gloves up to her elbows, and a smocklike apron, russet stains of varying age darkening the otherwise white fabric. Although most of her clothing is varying shades of black and gray, every once in a while, she may wear white or cream-colored clothing; in particular she favors a light tan vest accompanied by a white ankle-length skirt and a white button-up shirt. Her boots are always the same black leather Victorian-esque lace-ups, with their four-inch heels.

Alignment: Chaotic Good; she tries her best to follow what she considers to be morals and values in regards to both her magickal and scientific tendencies, but can sometimes be blinded by her endless curiosity.

The caster summons a ball of fire and hurls it at their target.
1
Mage's Staff

This staff is crafted with a glass ball at the top. Used for channeling powerful magic.
1
Strength

Increases the physical strength of the user for a short time.
1
Weaken

The pages in this bound book are blank, allowing the owner to use it to keep a record of their thoughts and activities.
1
Noble Dress

This women's dress is well made from the finest cloth. The gown is long and the bodice is embroidered.
1
Lesser Agility

This spell grants the ability to move at heightened speeds.
1