Character Info
Name: Danwe Brodda di Celestis
Age: Mid Twenties
Alignment: CN
Race: Half-Celestial
Gender: Female
Class: Arcane Trickster
Silver: 1267
View User's Profile
Danwe had started getting a little stir crazy in Hoja Mesto when Bat suggested that she and Xeik go to Nisshoki. It was an easy jaunt over the Tori Mountains, and it would allow Danwe to pick up some supplies that Bat was wanting to use in the guild house. Mostly pots and pans and maybe a couple of spices. It would also give Danwe a chance to do a little bit of training with Xeik and allow the boy to see a little bit more of the world that was outside of Hoja Mesto. Fortunately, Xeik was light enough that Danwe was able to carry him for a good distance through their journey, taking periodic walking breaks to rest her tired wings. This mode of travel had taken them about four days, and with those four days they had traveled under a sky that didn't seem able to make up its mind about whether it was day or night.

The sky looked amazing, its own brand of eerie beauty, and Danwe couldn't help but admire the battle between darkness and light. "The Dreamweaver and Father of Nightmares are fighting," she mused to Xeik long before they landed in the bamboo forest of Menomori on the outskirts of Nisshoki.

"It will be interesting to see how this battle plays out. Who knows what the lasting effects on the world will be," she said as they walked through the misty forest. Even as she spoke, the world around them brightened with the radiance of the newly arisen dawn, creating a picturesque and dreamlike view of the port town down the hill below them.

"I think it is safe to say that Naota won the battle for Nisshoki," she commented with a slight chuckle. "Look at how beautiful it is!" 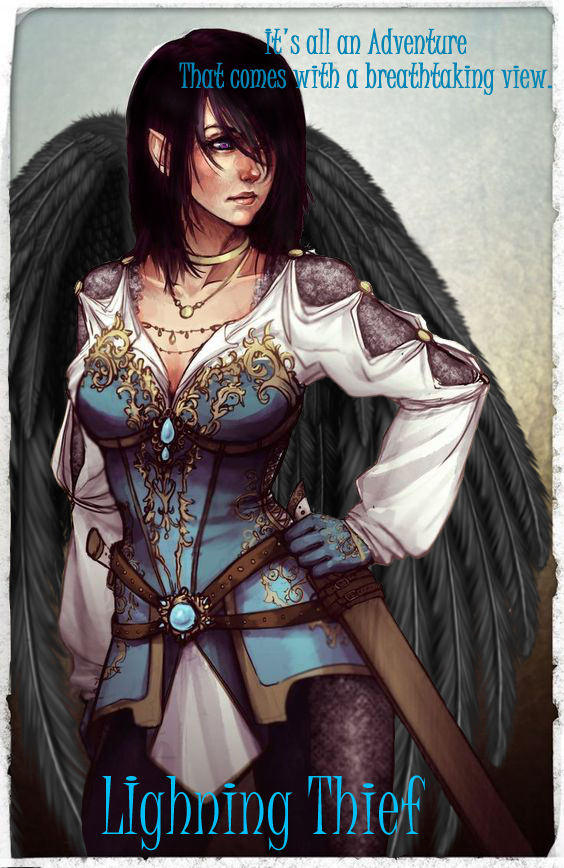 Character Info
Name: Xeik Eraphim
Age: 14
Alignment: CG
Race: Human
Gender: Unspecified
Class: Thief
Silver: 403
View User's Profile
Xeik was surprised, and more than excited to have Danwe take him on a trip outside of Hoja Mesto.  In fact, he had practically begged her to bring him along before she had told him that it was her original intention, which left the boy feeling very sheepish about his actions.  After a quick explanation to Lewis and the rest of the boys, he and Danwe made their way to Nisshoki.

As Xeik had no wings of his own, flying was, at first, an alarming experience.  But after awhile, his heart calmed, and he enjoyed the sensation of floating through the air.  "I could get used to this," he said once to the Lightning Thief in an excited tone.  She had found the boy's enthusiasm refreshing, which only made Xeik more excited.  The view, though, was something else that took Xeik's breath away.  The sky had been cast in a battle of twilight, the darkness and light fighting for dominance, creating a beautiful display that keft the boy in awe.

Finally, though, on the fourth day of their travel, the sky went white as Naota claimed the domain for the Light.  Xeik held out a hand, weaving it through the air, the light leaving a small trail.  "This is amazing…" he said aloud, his voice seeming to hang in the air, overlaid with a strange, dreamlike echo.  "Danwe, why do the Gods fight, though?  I thought it wasn't allowed?"  He had taken to learning about the world since creating his guild, and with that came a lot of questions.  "And…what do you mean lasting effects?  Did something really big happen before?"
I've got this!
-explosion-
I don't got this!
LightningThief
Sat May 19, 2018 7:15 PM Post Subject: Dreamweft [PR-Event]

Character Info
Name: Danwe Brodda di Celestis
Age: Mid Twenties
Alignment: CN
Race: Half-Celestial
Gender: Female
Class: Arcane Trickster
Silver: 1267
View User's Profile
"The Gods of Revaliir were once mortals like you and me," Danwe replied. "They are chosen by the Canelux World Tree, depending on what the world needs. Sometimes a deity can ascend, fall, and ascend again under a new domain, or even remain a deity but change the sphere they control. Because they were once mortal, many of them still have the same enemies and prejudices that they had as normal people. Sometimes, grudges can be held across different worlds," Danwe explained as she landed in a puff of white light upon the dewy ground as butterflies of light fluttered past them.

"There are natural opposites among the Gods now… Light and Dark, Life and Death… Where the Goddesses Angela and Dalanesca seek to balance each other out, and are more like sisters, The God of Light, Naota, and the Master of Never Ending Night, Xunatar, are natural enemies, even before they became gods. Xunatar is a demon, and Naota is a demon hunter," Danwe explained. "While the Gods are meant to rule over mortals and maintain the balance of their respective sphere, sometimes their differences are so great that they clash, despite being told to work in harmony. Same can be said of any nation that comes to blows with its neighbor. The same way natural disasters can effect the shape of the landscape, so too can the actions of the Gods have lasting effects on the world," she told him.

"For example, Hoja Mesto is the living testament to an old, long fallen god of knowledge. Even though he may have gone from the world, the City itself still remains. Twenty years ago, the Goddess Dalanesca suffered a tragic loss… and she blamed Angela, the Goddess of Life. Angela, to try and contain her destructive anger, imprisoned Dalanesca in a cage of Lacriamium, a substance harder than any known metal at the time. When Dalanesca broke free, she all but killed Angela, and shards of the Lacriamium where sent scattering across the world. And long before that the old god Sardon made the entire city Asyut sink beneath the sands of Harena, and turned the entire area into an uninhabitable desert. And in the same time, a god who was spurned by the people of Sidhiel, cursed the entire island to become shrouded in mist, so that no one would remember it or the people who were there. If any came across the island, and then left, all memories of the island and its people would be glamoured, and remembered as something different. This only changed when the current God of Magic, a son of that same island, ascended to the pantheon."

Character Info
Name: Xeik Eraphim
Age: 14
Alignment: CG
Race: Human
Gender: Unspecified
Class: Thief
Silver: 403
View User's Profile
At the revelation to this information, Xeik's mood seemed to drop a little.  So the Gods are just as messed up as the rest of the world.  For some reason or another, he had painted this perfect image of the deities as these infallible entities that could do no wrong.  As it seemed, the gods could be just like the mortals.  Petty, angry, and destructive.  "At least there are good Gods, like Naota," he said softly.  "They have so much more power than we do, though.  Why can't they just get along?"

He shook his head, "Don't answer that.  I already know the answer."  After a few more moments of contemplation, Xeik changed his focus, and instead started to looked around him at the all encompassing light that Naota had blessed this area with.  "So, what does it do?" he wondered.  Sure, it was beautiful, but if Naota was the Dreamweaver, and if this was the only effect, then Xeik might be heavily disappointed.  "And…how is this going to affect our trip?  Can we even make it to Nisshoki in this?
I've got this!
-explosion-
I don't got this!
Reply