Character Info
Name: Anon Y. Mous
Age: Uknown
Alignment: TN
Race: Unknown
Gender: Unspecified
Class: Illusionist
Silver: 352
View User's Profile
It was as if she knew where every single sensitive spot on his skin was, each nibble and scratch sending small shudders through him. Throughout the years, most lovers were lucky to realize they found the sensitivity. Yet, Chartora was finding them with ease, deliberately paying each spot that seductive nibble, driving him farther into lust’s embrace. Cecil had the distinct feeling that she was taking great pleasure in his reactions to her stimulations.

Chartora screamed as his fingers slid over her soaked underwear, a smile spreading on his lips as he gently scraped his teeth over her nipple, pinching the other delicately. She was so much similar to him, it was uncanny. Both were sexually pent up, both had terrible parents, harsh lives. Suddenly, her hand was stroking him, and he froze. Not from fear, but from the sudden pleasure of finally being touched after so long.

His body was trained to be in the bedroom, to be felt and used. To have denied himself for so long was similar to poor Chartora. Difference being the length of time each had spent between lovers. Cecil allowed himself to be pushed over, watching her every move down his chest. Her teeth and claws continued to find the little spots, causing more gasps and moans as he bit his lip with anticipation. But it all pales in comparison to the manipulation of the fabric upon his taut member. He moaned her name as his eyes rolled to the back of his head.

Each suck practically had him mentally screaming his begging and pleading, wanting so deeply to feel her hands upon his flesh. Soon enough, the angel before him granted his wish. Chartora took him completely into her mouth, her voice sending tickling vibrations along the entire shaft. By the gods, if her mouth felt this good, what did her vagina feel like? One hand entangled itself in her hair, his body shuddered as he came nearly as quickly as she had right into her mouth. He encouraged her to continue the oral stimulation to himself for a bit, riding out some of the sensitivity for a moment.

Finally, he coaxed Chartora back up to his lips, pulling her into a nice long kiss, still full of hunger and passion. Meanwhile, he moved her underwear off to the side, revealing her glorious womanhood without removing the fabric. While he didn’t want to just destroy clothing, even in his need, he was too far consumed by it to wait for the protective garments to be removed. Cecil guided himself to her opening, and her hips down, all without releasing her lips from his kiss. ”Fuck me, Chartora.” 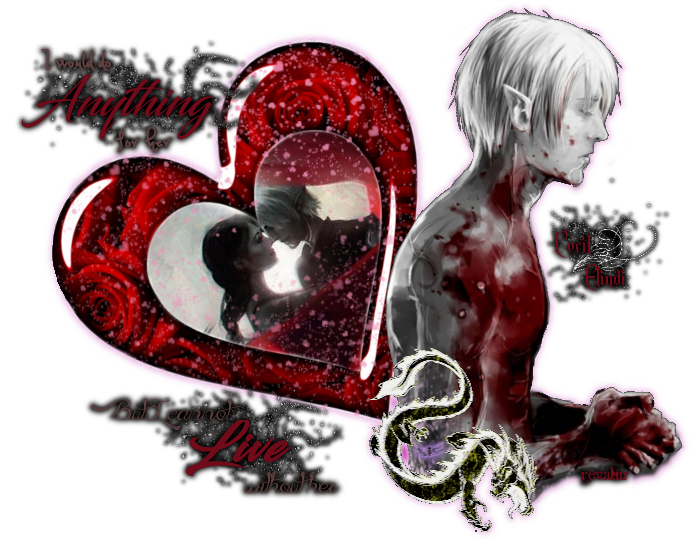