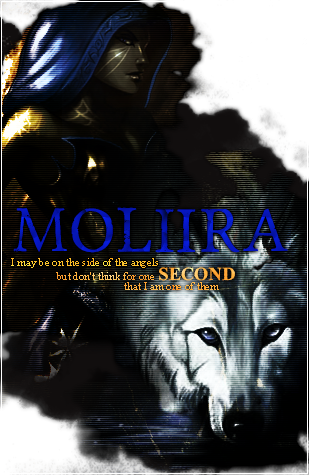 Character Info
Name: Moliira
Age: Old
Alignment: CN
Race: Drow/Lycan
Gender: Female
Class: Huntress
Silver: 1905
View User's Profile
City of Nisshoki Main Description
North of Railoch, a long, low stone wall marks the border of the sovereign city of Nisshoki. A legend surrounds its founding, speaking of a single village that escaped the immense storms of the stormy plains to the south. They traveled north, seeking a sign where they might find a safe haven. An eclipse came over the sun, and the sun’s halo turned an eerie shade of blue which had never before been witnessed. The people decided that it was the sign they had been searching for and began to build their city in that very spot. Fortune seemed to have smiled on those people, as there is a natural harbor, as well as a river that drains through the delta, providing rich farmlands. The people named their kingdom Ataiyo, honoring the blue sun that had shown them peace.

The harbor city is a vast, sprawling area, and this is where the majority of the kingdom’s people live. It is organized into a number of neat districts, including housing areas, marketplaces, industrial sections, and a single religious district. At the center of the city lays what used to be the Imperial Palace, though it serves a different function now. The Palace is the bureaucratic and legal center for Ataiyo and is ruled over by a council of five people composed of a warrior, teacher, merchant, farmer, and noble. The Ataiyoans believe that this maintains a good balance between all walks of life and that no one group can overrule another entirely. The palace is surrounded by cherry orchards, and the trees are given as gifts to foreign dignitaries. The blue sun banners hang all over the city as a sign of unification and a reminder that the people of Ataiyo are all one. Law and order throughout the realm are maintained by a group of warriors called Horitshi. They have a written code of honor that they follow at all times, and to dishonor this code means death. A Horitshi is denoted by the dual swords they wear, as well as their blue lacquered armor.

There are two districts within the city that are devoted to production. One is full of silk weavers, dyers, and tailors. The people here take the raw silk produced by the outlying farms, refine it, and weave it into fabric. The dyers and tailors produce all manner of goods from the silk cloth, including robes, shirts, boat sails, and bandages. Another district takes the harvested rice from farms and mills it into rice that can be cooked, or brewed into sake. The marketplace is always busy, with the many goods available for sale and trade. The south-most district of Nisshoku is called Ainochi, and is famous for its beautiful courtesans with their painted faces. Their white faces and blue eye-powder set them apart from the other residents of the city, as do their fancy silk dresses and elaborate hairstyles. The Tayuu provide entertainment in the form of singing, dancing, playing games, and conversation. For a certain price, their intimate attention can also be purchased, though the women always have the choice to not serve a customer. It is not considered a shame of any sort, and many young women work in the Ainochi district before they are married.

A large number of outlying farms support the city, as well as a vast fishing fleet. The farms produce vegetables, rice, and fruit, as well as mulberry trees for the silkworms. The Han'ei Road winds past all the farms, paved with stones, and providing an easy means of getting goods into the city. Oxen are the primary means of moving goods and people between the city and farms, and the animals are held in high regard. Horses are also raised, though only the rich can afford to keep them fed and maintained.

Character Info
Name: Moliira
Age: Old
Alignment: CN
Race: Drow/Lycan
Gender: Female
Class: Huntress
Silver: 1905
View User's Profile
Menomori Forest Description
The Menomori is a vast bamboo forest that stretches along the eastern borders of Ataiyo. No walls mark the border, for none are needed. It had long been rumored that the Forest of Eyes is haunted, though that is only part of the truth. The forest is constantly filled with a mist, preventing anyone from seeing too far ahead. Armies that attempted invasion find themselves lost and separated, and the fortunate ones find their way out to their entry point. Others wander for days on end, never to be seen or heard from again. Only their bones and armor are found, often miles away from where they entered the forest. Their spirits are said to haunt the forest where they died, attempting to prevent others from suffering the same fate.

If one enters the forest without ill intentions, however, there are a great many interesting sights to be found. The Mirazumi is considered one of the most beautiful places in the kingdom, and the lake’s mirror-like surface is said to be a portal to the world of the dead. Many come here to find solace in the passing of loved ones, and candles are often found floating in lotus flowers on its surface. A half day’s walk south from the lake through a hidden path leads to one of Ataiyo’s most guarded secrets. It is the home of the Shadoka school, where students are trained to be quick, quiet and deadly in their fighting. They are also taught how to blend in with crowds, and how to use a variety of easily found weapons. Both men and women train to be shadoka, watched over by a Master who carries no name. These wily fighters are part of the reason as to why an army has never successfully invaded from the east.

To the north of Mirazumi lies the reason why the forest gained its name. Even the bravest warrior becomes convinced of the sensation of being watched. Charms and windchimes dangle from overhangs, though it is clear they are not made by human hands. This area belongs to the Karasuko, a race of bipedal avians who resemble ravens. They are roughly human-sized, and can speak the Ataiyoan tongue with relative ease. But they are fiercely territorial, and outsiders are always watched. The Karasuko are known for being tricksters and masters of the sword, and quite willing to teach outsiders, provided that they bring a proper offering.