She had traveled so far she had forgot the place that where she was going. Wandering through planes, she was carrying no more than a few weak spells, scrolls, and books. Looking around, she mindlessly slithered into a forest, and looked at the tree's. Not wanting any attention from any of the animals, she focused only on the path ahead. Dry grass and leaves crunched under her feet. She had been walking in her human form for weeks now, not wanting to run into any hunters who wanted a new snake skin outfit. But of course, she is much weaker in her human form, so she decided to find a place to rest.

Wandering through tree's and bushes, she found a tree, not far from the heart of the woods, and started climbing. She had reached the thicker branches, when she summoned a mud ball and made a clay hammock. Surely, these spells can be put to use other than fighting. She though, and let her bag hang off a tree branch. She prayed silently, then layed down on the hammock, closing her eyes, and falling sound asleep.

Seconds turned to minutes, minutes turned to hours, as she slept, not noticing the sun, her energy source, disappearing beyond the horizon, retreating to places of the unknown to her. Animals swung about the tree's, coming out in the nights cool air, and hunting under the cover of the darkness. Birds called out, distant wolves howled, and all throughout, she slept.

She awoke right as the suns rays broke through the tree's thick canopy. Early morning, when the night animals were just finishing their nightly hunts. She blinked the sleep away from her eyes,, and sat up, pushing her hair out of her face. I told you spells can be used for different things. She said to herself. Her stomach rumbled. She looked around, desperate to find a fruit tree, or animal somewhere.

Just as she thought those words, a elk passed by her side. Finally! She thought and slowly shifted into her full snake form.

If only she knew, someone was near who sensed her snake form…
Nemesis
Wed May 6, 2020 5:00 PM Post Subject: Trespassing Upon Desires. (GO)

Deity
Administrator
Character Info
Name: Nemesis Volkov
Age: Around 4500, Immortal
Alignment: LE
Race: Vaewolf/God
Gender: Male
Class: Alpha (lawfully mean)
Silver: 16
View User's Profile
It wasn't common to have visitors stay put within the Bastion without making it to any of the safe havens nor to the manor where Nemesis resided at times when he wasn't in Kurayo. The realm practically ran itself between his devoted and the creatures that forever played the game of cat and mouse with one another. But the presence of every new individual didn't go unnoticed by him; the god felt the intrusion each and every time someone treads foot into his territory. He wouldn't greet them out in the wilderness normally; he preferred to do so once they made it to his doorstep. But it was a tad different for him this morning.

Getting out of bed, he still felt the outsider, whoever they were, still in the woods. Perhaps they hadn't realized where they were? There had been a few incidents where a person followed the darkness of their own hearts without knowing and were transported here. Ultimately, he would simply let them travel back, but not without a small tribute first. He supposed curiosity caught hold of his wolfen side about the stranger. He rose and walked all the way downstairs and through the entrance, fully nude before he shifted into a large, white wolf with crimson eyes. He quickly paced for the dense woods with unnatural grace that wouldn't be expected from such a massive creature.

The deeper he traveled, the more a scent that didn't belong in the realm grew, and he was all but certain that his visitor would be at the end of the trail. Despite him running at full pace at this point, his paws fell silently against the ground beneath, leaving any potential prey without warning of his presence. Not that he was looking for a meal at the moment. Eventually, Nemesis came to a grinding halt when the scent was heavy against his muzzle, and his eyes lay upon a large serpent that was seeking a hunt in the form of an elk. Preferring to watch the scene play out, Nemesis simply watched from the shadows, eyes gleaming on the snake as he waited for the moment she would make the kill. Once that was over, he would try and make his approach before she started feasting. It was rather rude to disturb one while they ate, and it was a dangerous thing among predators.

"Now where did you come from?", he asked nonchalantly with a tilt of his head. "And do you know where you are, my little serpentine friend?" 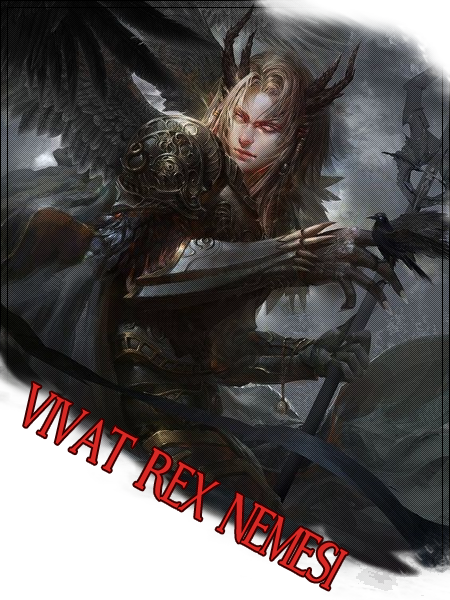 The world could always use more villains

Nemesis is the Dark Kaiser and the Apex of Terror.
God Rules
I. He is unmatched in dark and mental magic.
II. Nemesis can conjure up one's worst fears.
III. The god is able to feed on fear psychically.
The Volkov Family
Brandon, the Mad Admin!
UnbornCelestial
Wed May 6, 2020 7:18 PM Post Subject: Trespassing Upon Desires. (GO)

Character Info
Name: Emily Starborn
Age: 14
Alignment: CE
Race: Naga
Gender: Unspecified
Class: Mage Trainee
Silver: 98
View User's Profile
She jolted, unaware that someone had already sensed her presence. The elk now heard her movement, and bounded off into the brush. She turned to look at the stranger and froze. Taller than her, yes of course, bigger build, older, and most obviously, faster. But her weight, because of her tail, could be used against him. She stared into his eyes, almost hypnotized by his gaze, and yet she found some sort of security being around him. Could he possibly be an evil Alignment? I feel safe when with those sorts. She thought to herself.

She tensed, and straightened her posture, trying not to make a bad impression, but she also wanted to look…somewhat intimidating. She could change into her human form, making her look more innocent, or she could change into her full naga form, and being able to slip away in some trees. Dispite her full naga's 50 foot size, she found it easy to blend in with tree's, or a parries grass.

She shifted her tail weight uncomfortably. She would only turn full naga when she felt threatened. Of course, staring into the eyes of someone who could easily kill her, was of course, enough threatening that one might run away or tremble in fear. But even though she was 14, she decided she wasn't going down without a fight. She would kill him if need be.

Yes. She said, and slowly transformed into her 50 foot long, green naga form, her bright yellow eyes piercing into his deep Crimson red orbs. I know where I come from, and… She hesitated. She had been wandering for so long, she had no idea she had wandered into the Bastion. …I know where I am. But this was a lie, and she new, her newly found "friend" could sense she had not been honest.
Nemesis
Fri May 22, 2020 5:18 PM Post Subject: Trespassing Upon Desires. (GO)

Deity
Administrator
Character Info
Name: Nemesis Volkov
Age: Around 4500, Immortal
Alignment: LE
Race: Vaewolf/God
Gender: Male
Class: Alpha (lawfully mean)
Silver: 16
View User's Profile
The wolf didn't fear the serpent by any means as he bore his eyes upon her. No, and why would he when he was the apex in this domain? Still, he kept such innermost thoughts among himself and simply watched in eerie silence as she watched him back. Perhaps she was upset about her prey, which was now fleeing for its life and he wouldn't blame her if she held some ill will against him. Then again, she had let herself get spooked enough to alert the elk.

His head cocked to the side as she adjusted her body and he fell onto his haunches. While she was trying to intimidate him, he looked at her akin to how a puppy looked on at something new and curious. Two enlonged fangs protruded from either side of his maw, clearly showing his guest that he was much more than just a large wolf. He breathed in, and could smell the traces of fear that drifted from her, though she was attempting to put on a brave face. His eyes narrowed darkly as she transformed into a large reptilian form. Clearly she was more than just a snake herself, which fetched his interest even more. Nemesis blinked as she gave him a rather vague set of answers. There were hints of doubt laced in her words; he could hear it as clear as rainfall in the morning. What purpose would it serve to lie to him? In any matter, he supposes that this would at least be entertaining to continue playing along.

The wolf leaned forward and stretched lazily before arching his back and heard the cracking of some bones in him before he gave her an almost wolfish grin. "Then tell me, where do you come from and where are you now? If you know the latter, then you should know who I am, dear girl."

The world could always use more villains

Nemesis is the Dark Kaiser and the Apex of Terror.
God Rules
I. He is unmatched in dark and mental magic.
II. Nemesis can conjure up one's worst fears.
III. The god is able to feed on fear psychically.
The Volkov Family
Brandon, the Mad Admin!
Reply